There are many different types and brands of generators. Whether you’re looking for a portable generator or a whole-house one, Champion is one of the leading brands in the business. Champion generators are loved for their affordable price as well as their reliability and durability. Many people wonder, however, if Champion generators need to be grounded or not.

Not all portable generators have a floating neutral, however. This article will look at what you need to do when this is the case. We’ll also look at how to ground a generator and why it’s necessary to do so.

What Does Grounding a Generator do?

Under normal circumstances when nothing goes wrong, your generator doesn’t need to be grounded. Electricity, both in your generator and in your home, is designed to flow along pre-destined paths through wires. During normal operation, the electricity flows through hot wires to different parts of your system and ends in neutral wires that keep the electricity contained.

However, under abnormal circumstances when there’s a power surge, a lightning strike, or anything else that can drive your electricity off course, a grounding system is designed as a backup safety measure. In your house and on power cords, appliances are grounded by the third prong on an electrical outlet.

On generators, grounding is usually achieved via a ground rod, the metal frame of the generator, or a floating neutral. No matter how grounding is achieved, it’s meant as a safety feature to direct rogue electricity into the ground, rather than towards you or something nearby.
The electricity that’s directed into the ground presents little to no threat to people, animals, or objects.

Risks of not Grounding a Generator

The biggest risk to not having your generator grounded during a power surge is electrocution. If you happen to be touching the generator or holding something that’s connected to the generator, such as a tool that’s plugged into it, you risk getting zapped with electricity. Electrocution can cause serious injury or even death if the current is strong enough.

The sudden rush of ungrounded electricity can also create enough power to produce an electrical spark. If the spark happens to land on something nearby that’s flammable, you could have a fire blazing out of control in no time.

In the same way that a fire can hurt you or others in the vicinity, it can also damage nearby objects that catch fire.

While many generators include a grounding feature, it’s important to know if your particular model has one or not.

Do you need to ground a champion inverter generator?

While a floating neutral reduces some of the risk of electrical shock, it doesn’t completely eliminate the need for grounding. Therefore, you should consult your exact model of generator to determine if it needs to be grounded and how you should go about doing so.

Is grounding a generator necessary?

Grounding a generator is always necessary no matter what type of generator you have. This holds true even when you have a floating neutral. However, most generators are built with a metal frame that acts as the path of least resistance on your generator.

If there’s a power surge or an electrical short, the electricity will get redirected through the metal frame and into the ground. For your own safety, you should avoid touching the metal frame while the generator is in operation.

How do you know if your generator needs to be grounded?

The best way to determine whether or not your generator needs to be grounded beyond the metal frame is to consult your owner’s manual. Because of the safety hazard presented by an ungrounded generator, most manufacturers, including Champion, have very clear instructions on whether or not you need to ground their generators.

If you have this grounding nut on your generator, it is a good idea to ground it.

If you don’t have your owners manual, you can also perform a visual inspection of the generator. If you see a switch or bolt that allows you to transfer current to a neutral ground connector, this means that you need to ground your generator. Typically, this is done with the use of a ground rod that’s in the ground on one end and touching the generator on the other.

Do I need a ground rod for a portable generator?

Do Whole-House Generators Need to be Grounded?

Also according to OSHA, “If the portable generator is providing electric power to a structure by connection via a transfer switch to a structure (home, office, shop, trailer, or similar) it must be connected to a grounding electrode system, such as a driven ground rod. The transfer switch must be approved for the use and installed in accordance with the manufacturer’s installation instructions by a qualified electrician.” In other words, whole-house generators must be grounded.

How to Ground a Portable Generator

If your generator doesn’t have a metal frame or there are special circumstances preventing the frame from grounding the generator, you’ll have to install a ground rod. Here’s what you need to know to ground your portable generator.

The first thing you’ll have to do is pound the ground rod four to eight feet into the ground. In order to do this, you’ll have to purchase a grounding rod of the appropriate length, and you’ll likely need a sledgehammer and a step ladder. 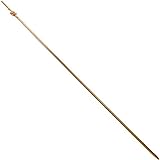 Here is a ground rod that will work to bring along in your travel trailer for grounding your generator while out camping.

It’s acceptable to hammer the rod in at a 45 degree angle if you’re having trouble. The reason for the depth of the rod is to make sure that people standing on the surface of the ground don’t get shocked.

Step 2: Connect a Copper Wire to the Ground Rod

Next, take a copper wire, preferably 8 to 12 gauge, and wrap one end of it around the ground rod. Use pliers to make sure that the wire is securely fastened to the rod in addition to a ground rod clip to fully fasten the wire to the rod.

Step 3: Connect the Generator to the Copper Wire

Finally, locate the grounding bolt on your generator, which is usually somewhere along its bottom. Take the other end of the copper wire that you connected to the ground rod, and repeat the process with the grounding rod on the generator.

Make sure that the wire is securely fastened to the generator. You may have to loosen the wing nut on the ground bolt, then refasten it over top of the copper wire to keep it in place.

link to Why Does My Weight Distribution Hitch Make Noise and How to Quiet It?

Weight distribution hitches (WDH) are meant to make your towing experience easier and more enjoyable. However, depending on your setup and the condition of your hitch, there’s a chance that it can...

Continue Reading
link to Do Weight Distribution Hitches Wear Out? How to make them Last

In terms of overall durability, weight distribution hitches (WDH) are one of the most durable types of hitches. Unfortunately, nothing in this world lasts forever and that includes your weight...